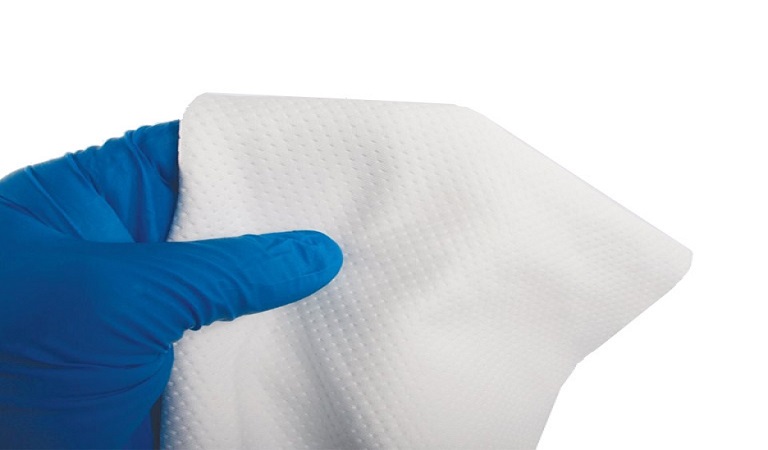 Cleaning surfaces and equipment in controlled environments has historically involved a variety of methods, but usually involves some manner of moving a cleaning material (wipe, mop, etc.) across a surface, often in the presence of a liquid solution. In operations in controlled environments, the challenge is in maximizing the ability, consistency, and efficiency to remove contaminants that are usually invisible to the people doing the cleaning – with serious consequences to process and product quality.
In a study conducted some years ago, various commonly used methods for cleaning surfaces were compared for their ability to remove dry particles from a known surface. In this study, particle removal by each method was measured against an ideal 100% removal of particles from the surface. It was clearly demonstrated that cleaning a surface with a wetted wipe removes the most contaminants from the surface compared to other methods.

First introduced by Contec, Inc. in 1988, presaturated wipes for controlled environments were initially developed to reduce solvent usage and increase convenience in hand wiping at IBM. Little did anyone realize at the time the full range of benefits presaturated wipes could ultimately offer, or the extent to which they would be used in unrelated industries. Because they provide exceptional solvent control, presaturated wipes were soon adopted by aerospace, semiconductor, pharmaceutical, automotive, and other industries in order to meet increasingly stringent VOC emission and solvent reduction regulations. Based on feedback from end users in multiple industries, a comparison of common methods of applying cleaning and other process solutions to wipes shows that solvent usage can be reduced between fifteen and fifty percent, depending on the method of saturation.

This has been a significant benefit to companies looking to manage solvent usage and emissions while retaining familiar work practices that involve hand wiping. Presaturated wipes however, provide much more than simple solvent reduction and convenience. In a ground breaking 1996 study conducted by Mattina, et al, The Cleanliness of Wiped Surfaces: Particles Left Behind as  a Function of Wiper and Volume of Solvent Used, five different, commonly used wipes were saturated at various volume levels below and above the full saturation limit of the wipes. The type of wipes tested included nonwoven polyester/cellulose, nonwoven polyester, meltblown polypropylene, and both plain cut and sealed-edge knitted polyester wipes.

The performance of the wipes in cleaning a common surface was then compared by measuring the contaminants remaining on the surface after wiping. From this study came two very surprising revelations: first, that the cleanliness of the surface after wiping had little correlation to either the type of wipe used, or the initial cleanliness of the wipe. For an industry that for years paid great attention to the cleanliness of the wipes and the materials of construction, this was almost shocking. Of course, there are other very real and significant considerations which determine the suitability of any specific wipe for a given application, but this apparent dampening of traditional considerations was unprecedented. The second revelation borne by the study was that the level of saturation has a significant impact on the cleanliness of the wiped surface. The results clearly indicated that a wipe saturated beyond its ability to hold solution left a surface with more contaminants than any other level of saturation. Indeed, saturation levels below the saturation limit of the wipe (i.e. a less wetted wipe) consistently resulted in fewer particle contaminants remaining on the wiped surface. It is thought that particles from the wiped surface, and the wipe itself, are distributed throughout the solution on the wipe.

A wipe with an excess of solution will leave some solution behind on the wiped surface, and with it, any contaminants within the solution. A graph typical of the relationship of saturation level and particles left on the surface shows a significant increase in surface contamination above the saturation limit (100% saturation) of the wipe.

Combined, these studies indicate presaturated wipes provide very real benefits in surface cleaning and the process of hand wiping surfaces and equipment. In the context of overall operations within any controlled environment, hand wiping of surfaces and equipment is an integral part of the manufacturing process. Indeed, the process of cleaning is as critical a tool to product quality as any production hardware or manufacturing process. More effective and consistent hand wipe cleaning will result in greater consistency and quality of the overall production process and the resulting product. As has been shown, presaturated wipes are an ideal way to increase process control and standardization, improve safety, reduce solvent and VOC emissions, and enhance convenience.