Wipe Performance Goes Under The Microscope 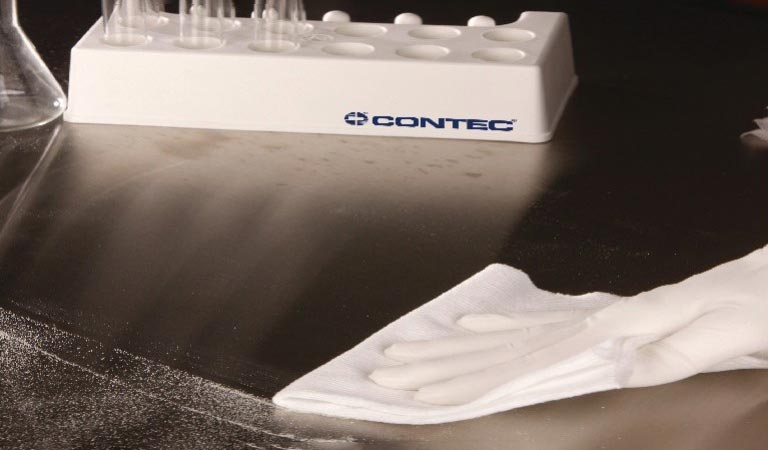 Cleanroom wipes have developed considerably since their initial introduction.

Cleanroom wipes have their origins in the nuclear industry when the first critical wipes, made of cotton twill, were used to control removal of radioactive dust particles within the contained nuclear reactor environment. The emergence of microelectronic manufacturing required cleaner wipe options and the cotton twill was replaced by Nylon monofilament. By the mid 1980s polyester monofilament became the standard critical environment wipe. Only later, did the pharmaceutical and life science sectors – more concerned with viable contamination – adopted critical wipes. Today wipe production for all types of critical environment is big business and as manufacturing technology innovates, so the demand for cleaner wipes grows.

In 1998 Contec introduced the first pre-saturated wipes for cleanrooms to reduce solvent use and increase convenience in hand wiping. One of the quickest adopters was the medical device industry, which saw the productivity improvements and process controls that the technology offered. Sterile pre- saturated wipes were introduced in 1990 for the pharmaceutical industry and the developing biotech market.
Substrate innovations

In the late 1980s, microfibre was introduced. The definition of a microfibre is a fibre with less than 1 decitex per filament. A decitex is a measure of linear density that is commonly used to describe the size of a filament or fibre.1 One decitex is 9/10th of a denier. To put this into perspective it is 1/16th the diameter of a human hair. The fibres can be combined to create yarn that can be then be knitted or woven into a variety of constructions. Microfibre fabrics can be broken down into two main types, splitable microfibre and straight filament microfibre.

Straight filament microfibres are usually made from 100% polyester. Splitable microfibre consists of very fine threads of polyester and polyamide (nylon) that are combined to form a single thread. The nylon is used to glue the fibres together until they are split later in the process. Split microfibre (Fig. 1) possesses numerous wedges rather than the rounded threads found in other yarns. It is these wedges that provide the ability to collect microscopic particles from a surface.

This expanded surface area and the capillary action of the fine threads dramatically increases a microfibre wipes’ sorbancy. A change in the percentage of the microfibre blend will yield slightly different properties. This split structure gives the wipe the ability to pick up particles even when dry, and it can easily remove residues often without solvent. The split fibres create microscopic ‘hooks’ which collect and hold dust, dirt and particles more effectively than rounded fibres such as cotton (see Fig. 2). The microfibres are also positively charged so attract negatively charged dirt electrostatically. Unused wipes are very soft so won’t scratch and damage surfaces, however care should be taken when re-using wipes as the very structure which makes them so good at picking up particles also means that particles get stuck in the fibres which can then scratch a sensitive surface.